Paintings From April ’19 Trip to Wyoming

It was a dark and stormy night.

Although I spent 11 days in Wyoming, I only came home with three paintings. I was there to do research, so the challenging weather was actually sort of a good thing in terms of keeping me on task.

Anyway, here they be. As usual, I focused on painting on unstretched canvas that I taped to a board.

I painted this painting below when I got home based on a photo and experience I had one morning while eating breakfast. I’m not done yet–I’m not satisfied with one of the tree trunks, I want more yellow/orange/brown in parts of the grass, and there needs to be some very light grey texture in the background to signify the bare branches of the cottonwoods. I may lighten the doe as well.

I have more photos from the trip that will inspire additional paintings. Ω

Through plague and
purifying smoke
the lax drag on,
the proud puff chests.

some have heated seats.
They cut back on their meat
and wean their hunger with milk
made from beans.

In sooty rooms
the educated brood,
the papers pile,
the poems mold.
Wake ears hear the goings on,
the treble static of patrons with thin pride
buying bottles tableside
down the street from a shut library.
Wise counsel suggests
that the prudent cut their wine
with tap water and contaminants
easing the disease
so it can feed in peace.

Precious now,
as we make last arrangements
for the changes.

When I lived in Astoria, Queens, I passed an ornate (for Queens) building with a handsomely engraved sign saying “Maltese Center,” everyday on my way to the subway. I loved it, because it reminded me that I lived in a global city that has enough immigrants from a tiny country 11 hours away by plane to justify having its own center.

Then one morning, as I walked past, I noticed (how could I not?) that the sidewalk was spraypainted, with two-foot letters declaring “FUCK MALTA.” Now I realized that NYC was so big and global that not only could it sustain a Maltese Center, but it could also sustain an active anti-Maltese faction.

This was the extent of my thoughts on Malta until about four years ago, when I became acquainted with two painters in Malta, Andrew Borg and Anthony Weitz. Both became Facebook friends of mine, with Weitz becoming quite a familiar person to me. I enjoyed both of them as people, and I admired both of their work. (They know each other but I don’t think they are close.) As a curious journalist, I did some superficial research on Malta and liked what I found. Malta is currently on my bucket list.

In December, Borg contacted me because he wanted a quote from me on a poster advertising an exhibition of his work. I was happy to comply. The poster is above. LONG LIVE MALTA! Ω

One of the most remarkable persons I have met is an art teacher in Dubois, Wyoming. Dubois is considered by some to be the most isolated town of reasonable size in the Lower 48. Its population is about 975 people. It is a great town. But it is small. And the weather and terrain is tough. Here’s what kind of person that attracts and forms.

The teacher’s name is Danita Sayers. She is a smart cookie. She hunts for her own meat. She knows several grizzly bears personally (and warily). She knows what plants cure what ills. This topic, call it what you like–herbal medicine, ethnobotany (much of Sayers’ knowledge comes from area tribes), naturopathy, simple common sense–is what my latest article is about.

In September 2018, at the Susan Kathleen Black Foundation’s Artists Rendezvous & Workshop, Sayers took the stage for a presentation that came in well under her 30-minute timeslot, and she covered 30 times what some people do in 4 times as much time. So add succinctness to her skills.

Now that the numbers are out of the way, I’mma give you the link to the article. But first, a few more words about Danita.

She is physically striking, with a very small frame and very long brown hair. Her mind is always turning and you can see it happening, but she is patient in answering questions and helping people. Her students absolutely dominate the statewide arts competitions, and they admire and respect her. To get to work, Danita sometimes has to use a combination of walking, ATVing, and driving, down from the grizzly criss-crossed top of one of the Wind River Mountains just west of town. Her stories will make you cry with laughter.

I heard she was planning on writing a book about her experiences with grizzlies. I presumptuously offered to help. She shared a two-page excerpt of her manuscript, and I quickly realized that she needed no help. Her prose sings.

I have no doubt Danita Sayers would be prized in any community (even as she seems to remain a mystery to more than a few Duboisites). She could take Manhattan, rock LA, intoxicate New Orleans and straighten up Philadelphia. She will do none of those things. Danita likes it just where she is. So perhaps one of the most remarkable things about Danita is that her pride is seemingly reined in to the perfect balancing point of self-assurance and utter indifference toward recognition, praise, fame. Ω

Eye Docs, Jackalopes, Nubile Eyeballs, and One Made Up Word 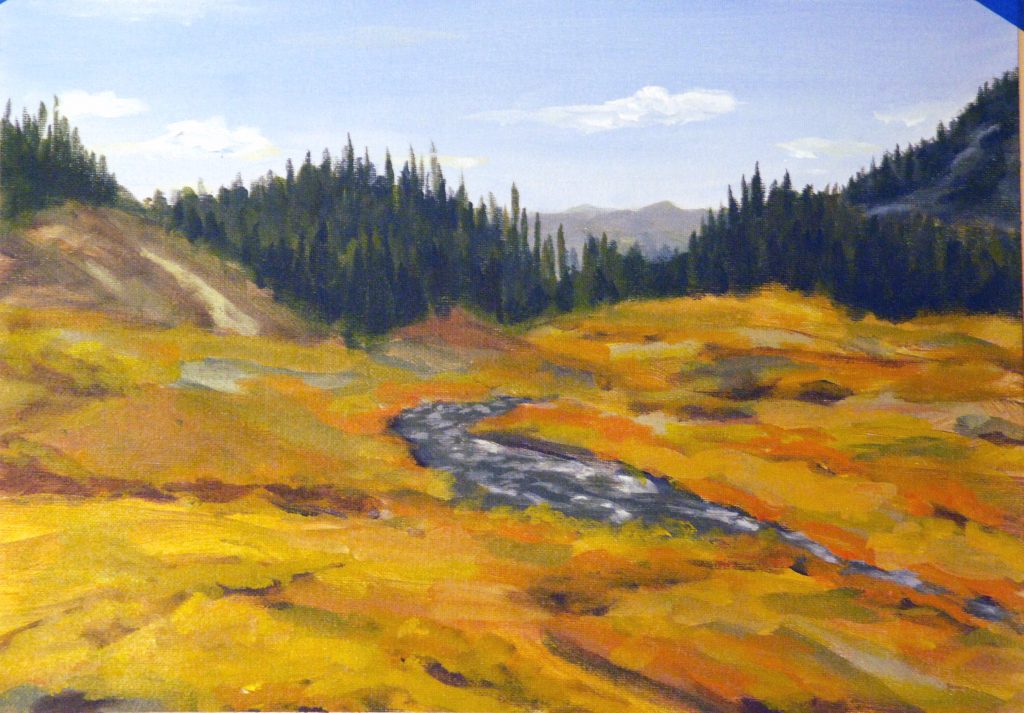 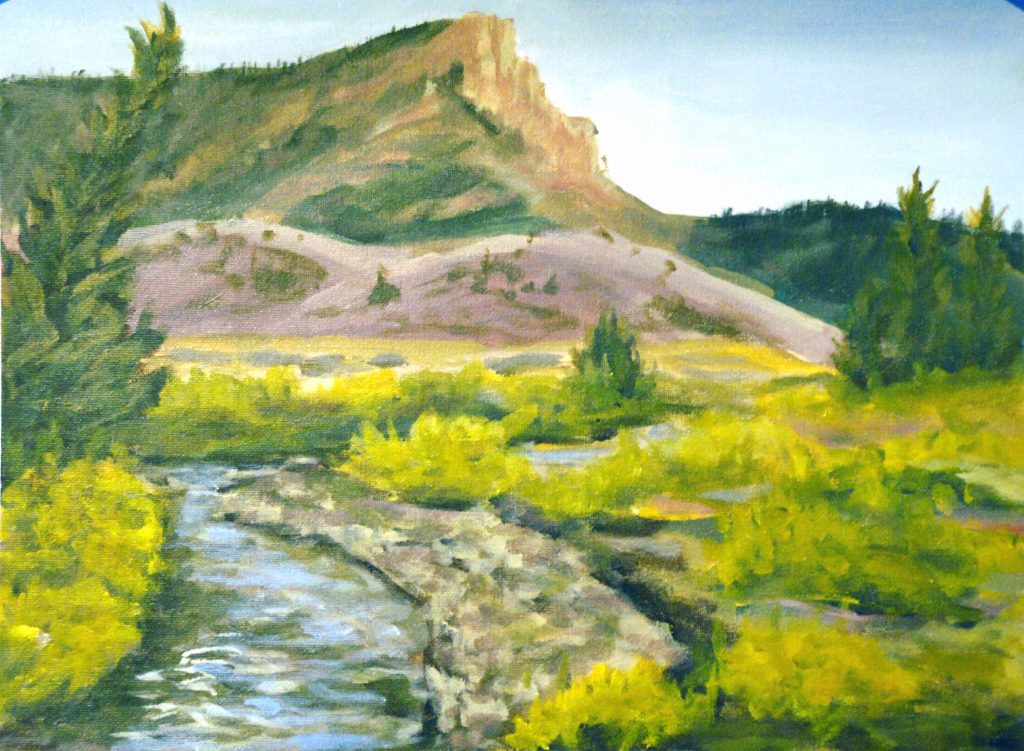 My last two paintings have been higher key than my usual paintings. The colors are brighter and a bit more saturated. I think I know why. I wore sunglasses during the block-in stage for both of them.

It was an experiment prompted by two forces. One, I had noticed that the cheap sunglasses I had bought at the Jackalope Gas station made colors look more intense. I wondered what would happen if I painted while wearing them. Two, about a month ago I was painting in Maine and I set up facing the sun, because the crazy glare on the ocean was so cool looking. I painted right into the sun, and yeah, it gave me a headache. I’m lucky it didn’t snowblind me. I posted about this on Facebook, and within hours, I received an email from my optometrist insisting that I promise to never do that again.

He’s not your typical optometrist. Macular degeneration runs in my family, so my eyes most likely are especially susceptible to damaging UV rays. So he had good reason to rattle my cage. But the email also made sense because he and I do not have a typical patient-doctor relationship.

On my first visit to his practice, I asked him a few questions about his job. That’s typical; I’m curious how other occupations are. Anyway, he was doing that doctor thing they do at the beginning of an appointment—getting things out, turning things on, reading papers, making notes. I asked him if his floor was bamboo. He said no. Then he asked me why I asked. I told him that I had noticed long lines running down the wood, so I thought maybe it was bamboo. He smirked, sat back, and said the floor looked that way because it was installed incorrectly. He had contacted Home Depot and paid for a consultant to come to the office, examine the rooms and halls, and recommend flooring. He purchased the recommended flooring, and continued on to hire the installation team at Home Depot. The installers arrived, looked at the flooring that had arrived at the jobsite, and told my eye doctor that this flooring was absolutely the wrong thing for the office, and they were going to have to remove the previous flooring to put this kind down, and it was going to cost and take time.

It took even more time when they found asbestos under that old flooring.

So vision care or whatever audited my poor poor optometrist and he almost just shut down the whole practice. Or commit suicide. I think and I hope he was joking about that last part.

Anyway, so that was my first visit. About 20 minutes of discussion regarding optometric office management, and 20 minutes of determining how out of focus my eyeballs are.

The second visit ended in confrontation.

We were talking about macular degeneration, and discussing the efficacy of some of the OTC drugs/supplements that are designed to address it. (He agreed with my choice.) He reiterated that I should always protect my eyes outdoors. I asked if I could wear a hat instead of wearing sunglasses, and he said sure. I told him I wondered because of bounce light. After all, isn’t snowblindess caused by bounce light? He refused to acknowledge the existence of bounce light. He became indignant. I dropped it.

The last time I went, we discussed contact lenses. My prescription wasn’t a problem, but the shape of the contacts—well, of one of the contacts—was unusual, possibly a special order. Doc explained that most eyeballs are similar. One unit of measurement is the axis of the eyeball. He told me I have crazy axes. I said what. He said that they are shaped weirdly, almost nubile. Nubile eyeballs.

I was sort of at a loss for words at that point, and the appointment was wrapping up. I told him that I thought maybe Crazy Axes would be a good prison name for me. He was startled, stumbled backward slightly. He asked if I planned on going to prison. I responded that I had no desire or plan to go to prison, but I feel better about the whole thing now that I have a prison name, should I need it.

Doc was perturbed. That was the last time I saw him, but after that I did get the email. Which prompted the sunglasses today. Which explains the high key of my paintings. Ω