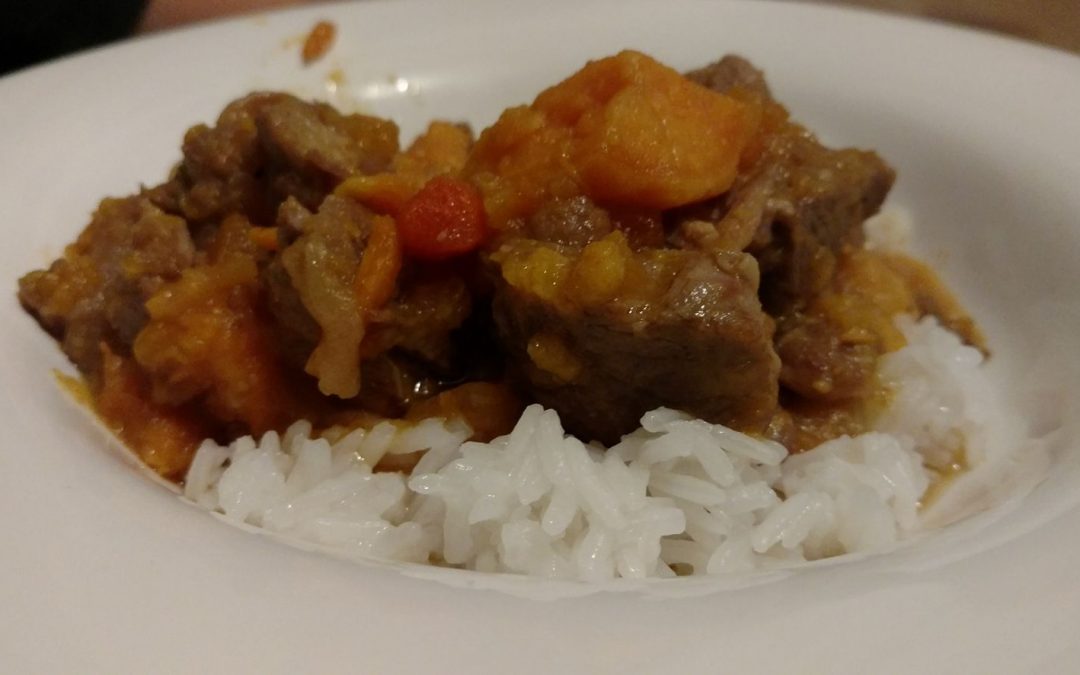 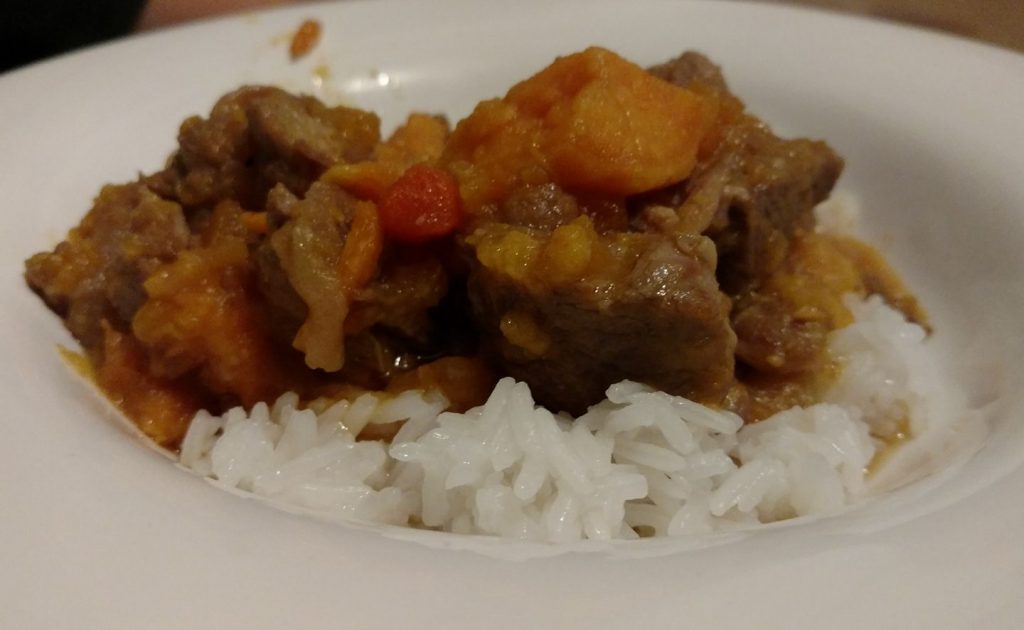 Stew pork cubes were on sale, so I bought two packages. What to do with them? I had made adobo pork, a Filipino dish, several times with reasonable success, but I wanted better results. I googled stew pork recipes and found one for Portuguese pork stew. So I mashed the two together and added my own spin. It was very rich and good.

Lightly salt and heavily pepper the pork. Heat bacon grease in dutch oven and brown the pork. Add the onions and garlic and cook further. Add the cayenne, brown sugar, bouillion cube, paprika, and celery and cook for additional five minutes. Add water to cover pork, add soy sauce and vinegar, bring to a boil. Add sweet potatoes and carrots and enough water to almost cover it all. Cover with lid and bring to boil, then remove lid and simmer, stirring infrequently and carefully so you don’t break up the sweet potato chunks. Let it reduce down until the liquid is halfway down the solids. Serve over rice. Ω

This was immediately embraced by Lynne and I as delicious; the boys ate it with no complaints and marginal praise. Good enough for me!

Brown the ground turkey in some bacon grease, add the onions and poblanos. Sautee, then add celery. Add all spices and add water to cover. Bring to boil, then turn down to simmer for 1 hour. Add corn 20 minutes before serving. Serve with cheapo mexican-style shredded cheese, sour cream, and ground cayenne pepper at the table. 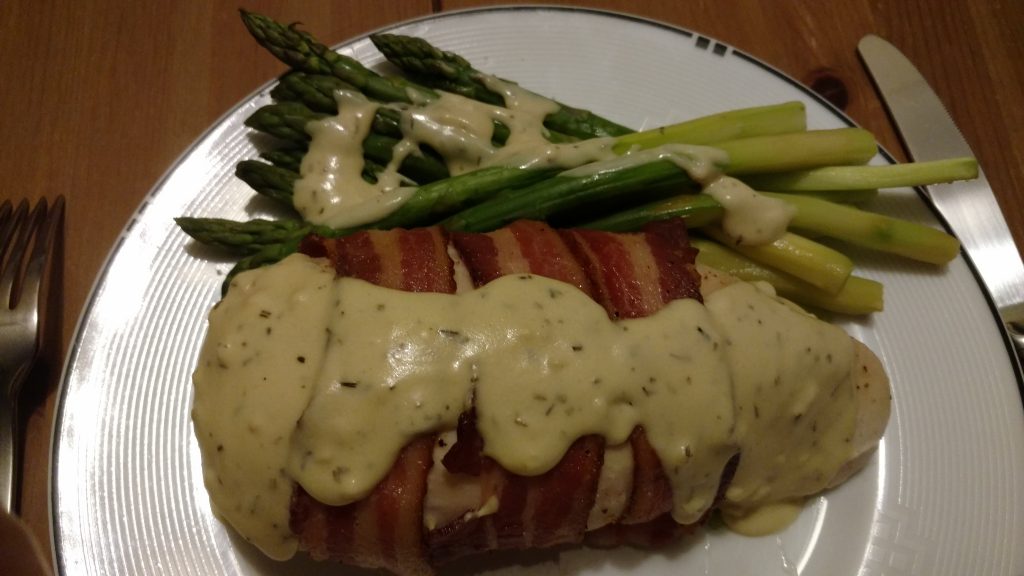 The photos and videos of chickens in factory farms are horrifying. The research into birds given antibiotics–and what that means for both us and the chickens–is scary. And a free-range, organic chicken costs almost five times as much as a Perdue chicken in my neighborhood.

We have found halal chickens are the best value when we want to eat ethically. But we are pretty strapped for cash, and we have two hungry boys. So about half the time, we buy Perdue chicken or similar. Fairly taste-free, so oversized that our older son ponders whether they have benefited from breast augmentation courtesy of Uncle Rico, this chicken meat needs a lot of help. 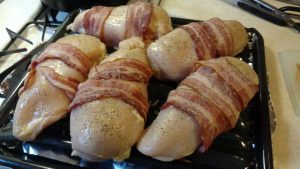 Today, I sliced open some skinless boneless breasts and put slivered scallions in the cavity. I sprinkled lemon pepper on the inside, then bound them around with two slices of par-baked thick-slice bacon, misted them with olive oil, and baked them.

We had already had a big meal at lunch because my wife teaches at night, so I only made asparagus to accompany. To sauce it all together, I took some of the rendered bacon grease, fried some garlic, added white wine, lemon juice, and water and a bit of chicken bouillon paste, and reduced. I added some dried rosemary and thyme, then mixed about three Tablespoons of sour cream with one Tablespoon of flour, and thickened the sauce with that. I poured that over the finished chicken and the asparagus. 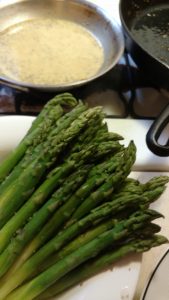 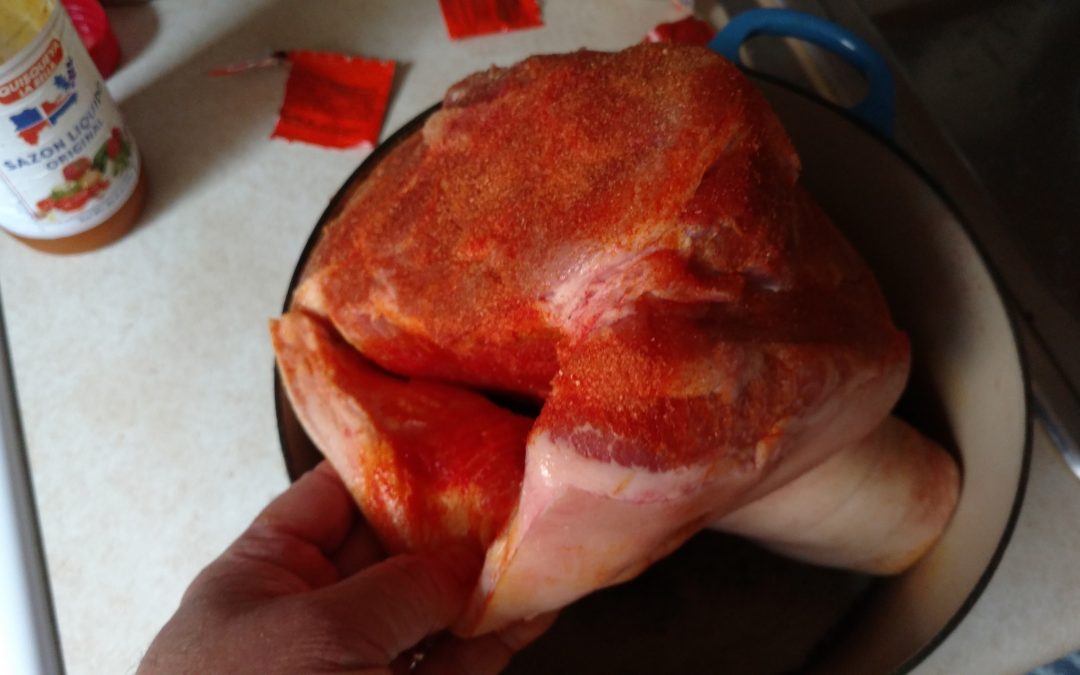 I make pernil almost twice a month for my family. Everyone loves it, and it’s economical. Pernil is a pork shoulder that is slow roasted with Puerto Rican spices. Our neighborhood is a great place to buy the pork shoulder; the customers want a pernil that has lots of fat in it and a thick layer of skin on one side. If you buy a pork shoulder in a fancier neighborhood, it will be too lean and trimmed too close to be of any use to me. I don’t pretend that my pernil is authentic. True Puerto Rican style would be to cook the pernil so that you can eat the chewy skin. I braise it. I also don’t make my own sofrito. I’m not a good Puerto Rican, but I get a pass because my Southern roots blend well with that cuisine in a few crucial ways. 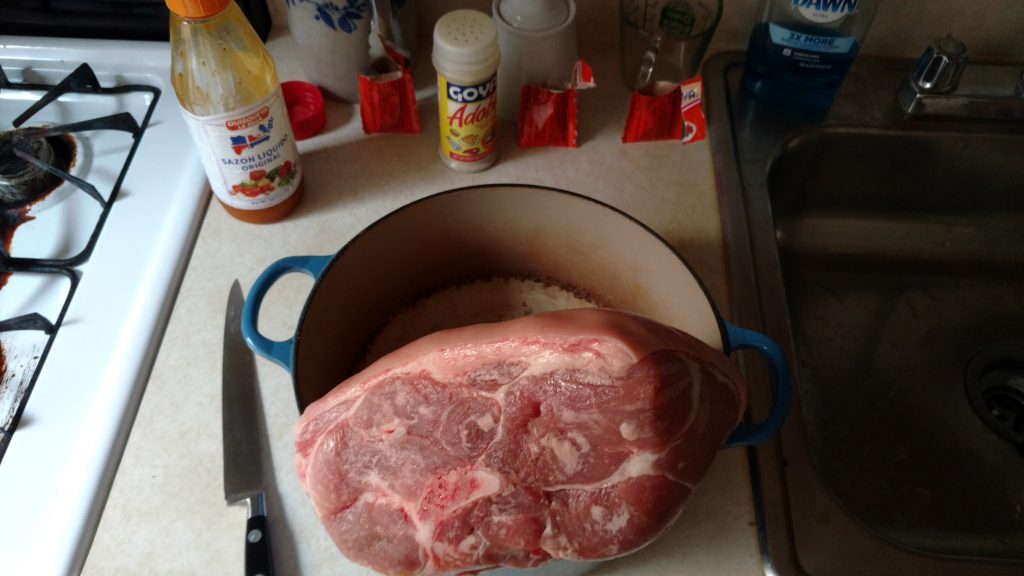 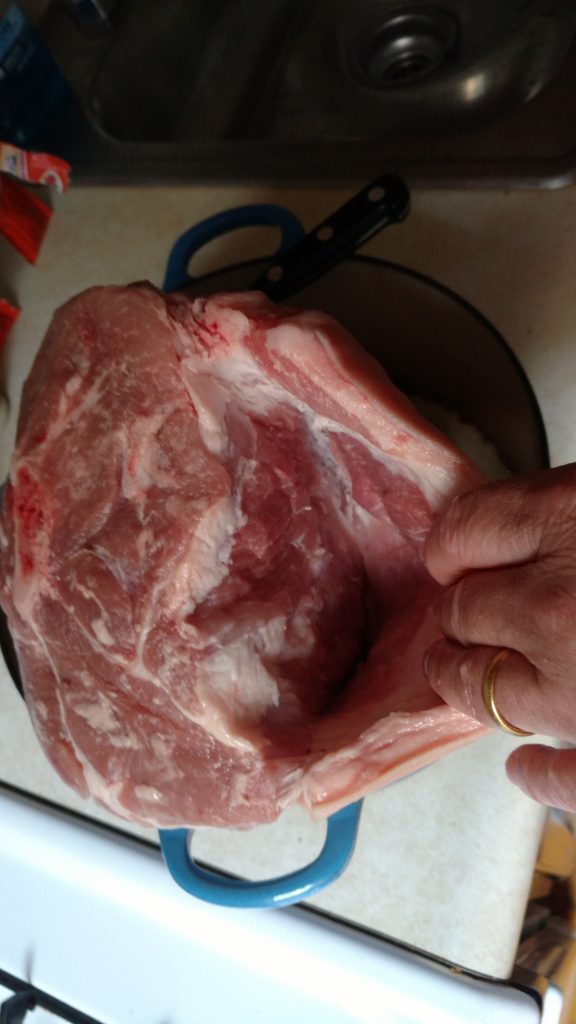 Cutting a pocket in between the meat and the fat/skin

I put Adobo powder, Sazon powder (both Goya) all over the shoulder and plenty in the pocket. Then I squirt as much Sazon Ranchero liquid into the pocket that it can hold, squishing it around so it gets all the way down into the bottom of the pocket. 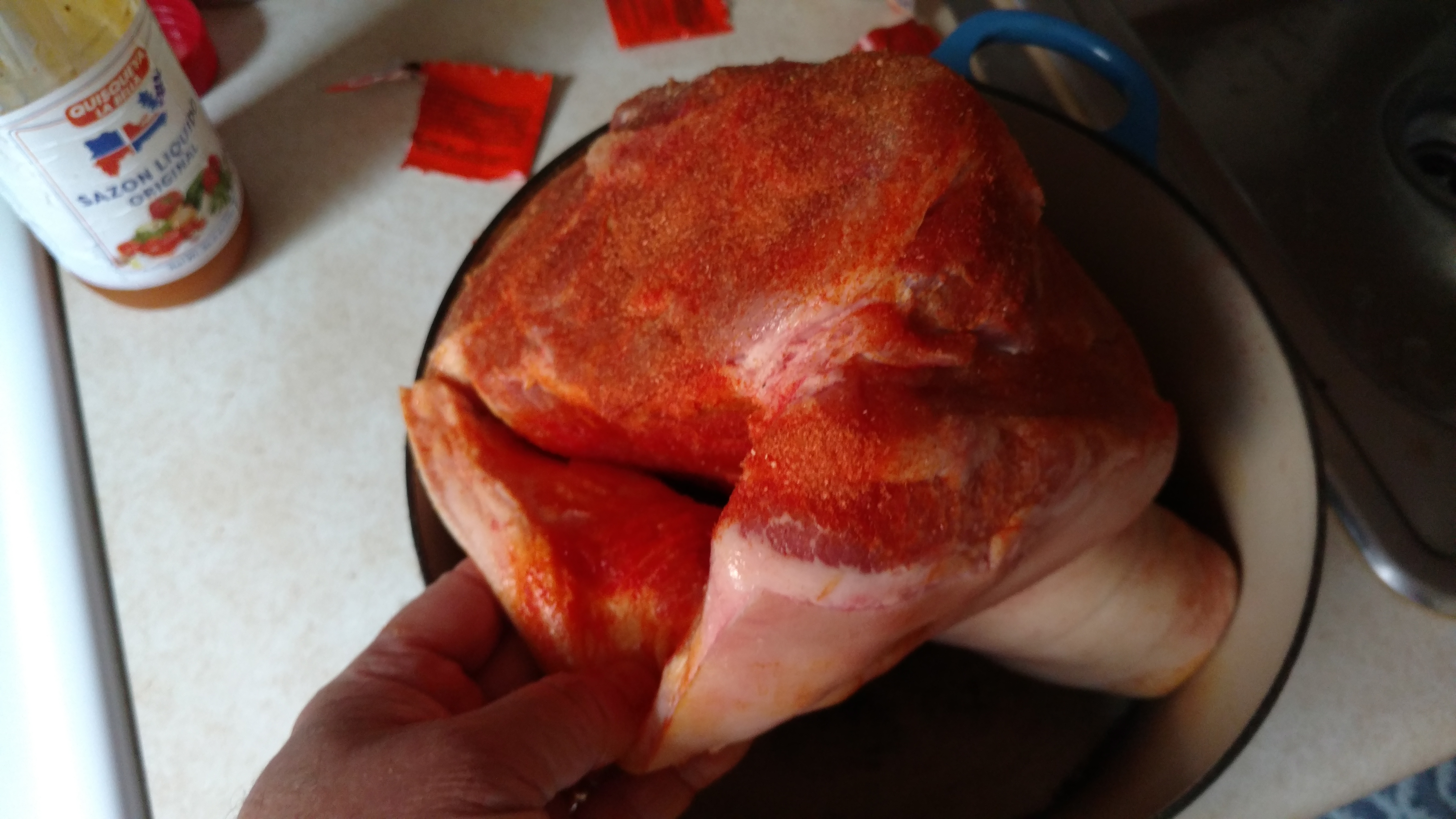 Add a dribble of vinegar to the bottom of the pan, then I put it in the oven at 9am at 200 degrees. 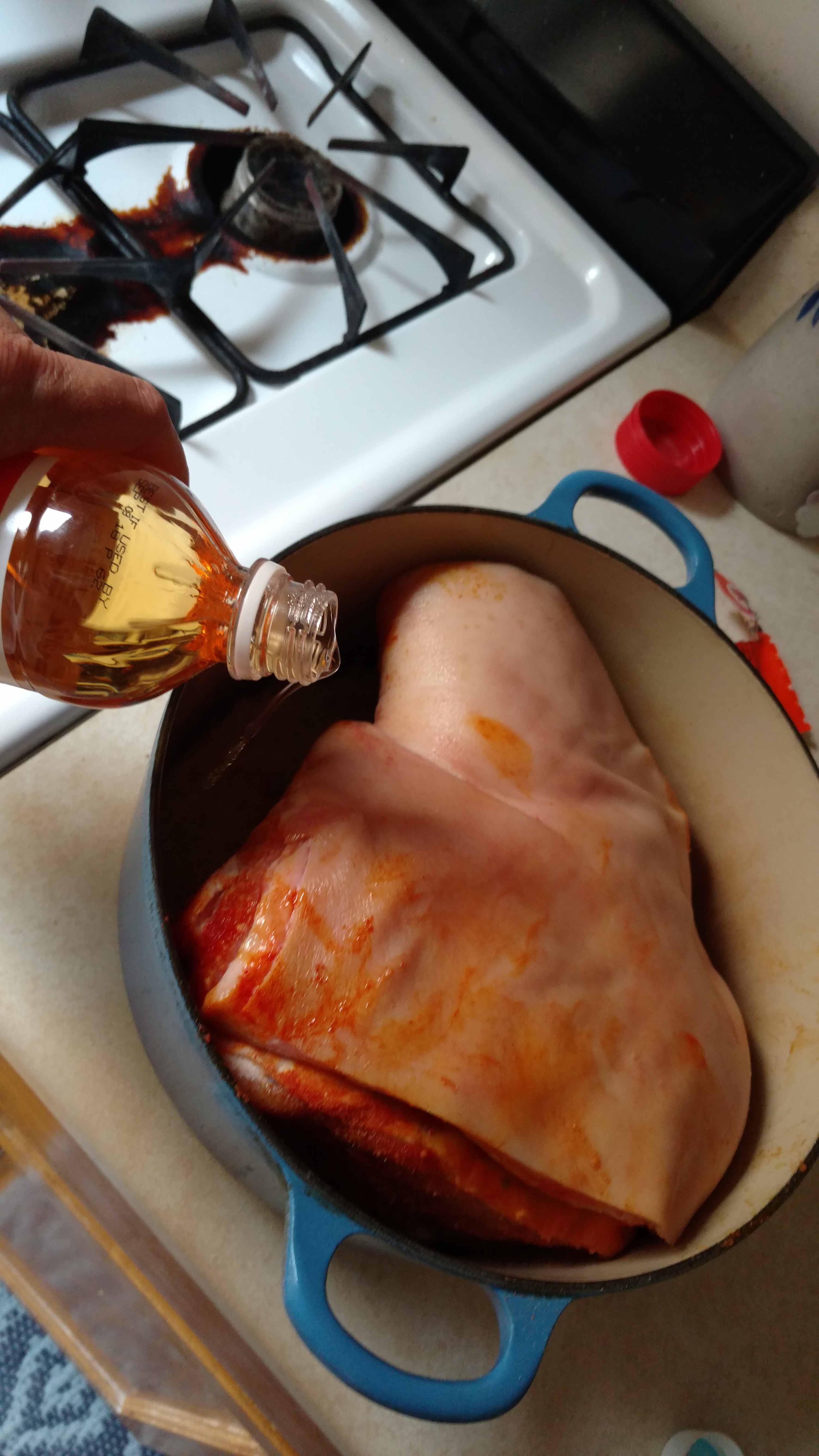 A bit of vinegar before it goes in the oven.

At 6:30pm, I take it out and suck all the pot juices out with a turkey baster. That liquid gold will be used to cook the rice. (I also put some in the small colorado beans that I have simmering with diced carrots and onions.) Then, I pull off the skin and pull out the big bone from the shoulder, and serve the pernil in a big bowl with tongs. 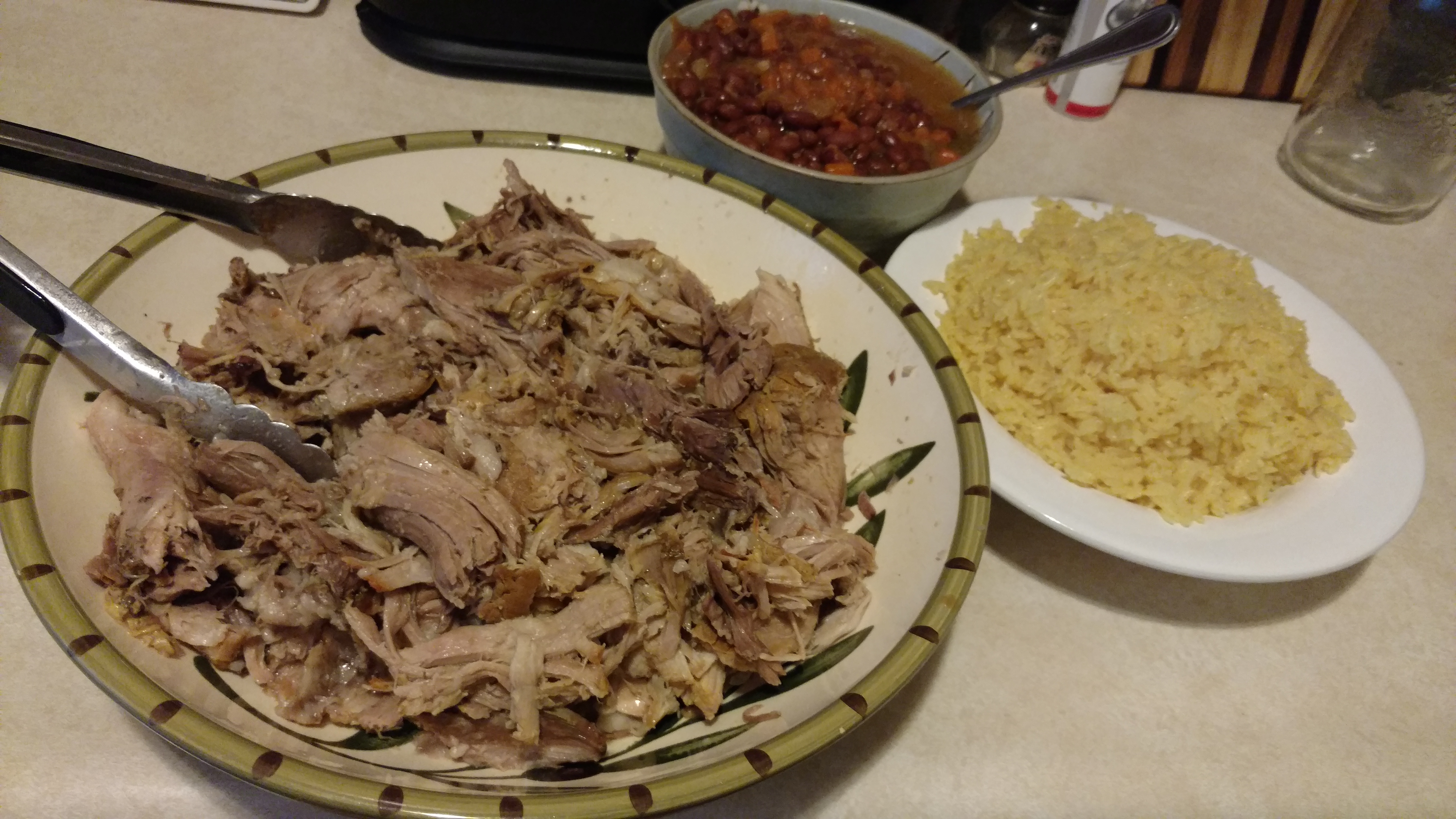 I put lots of hot sauce on my pernil. Ω 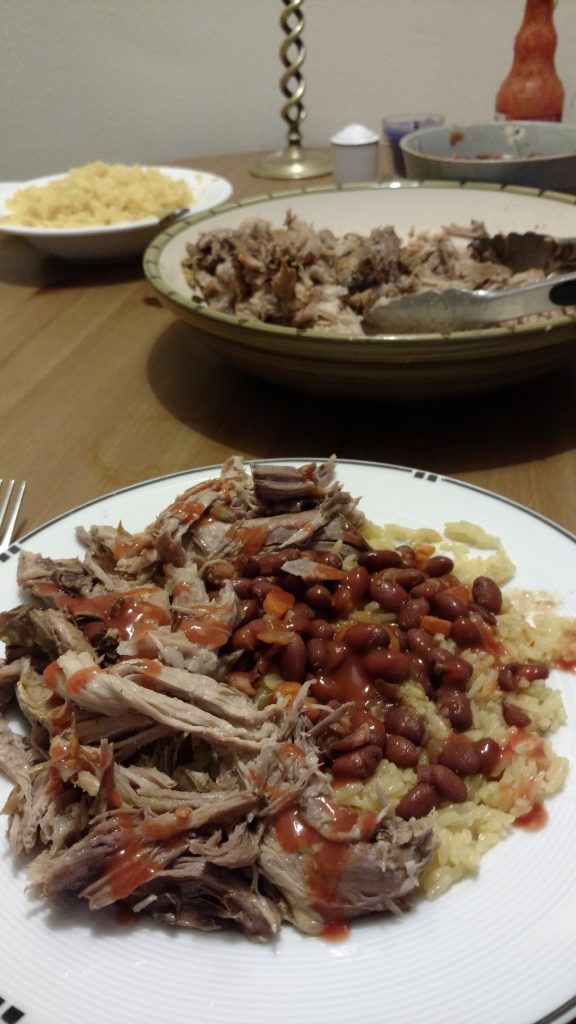 Lots of Frank’s Hot Sauce for me, please!