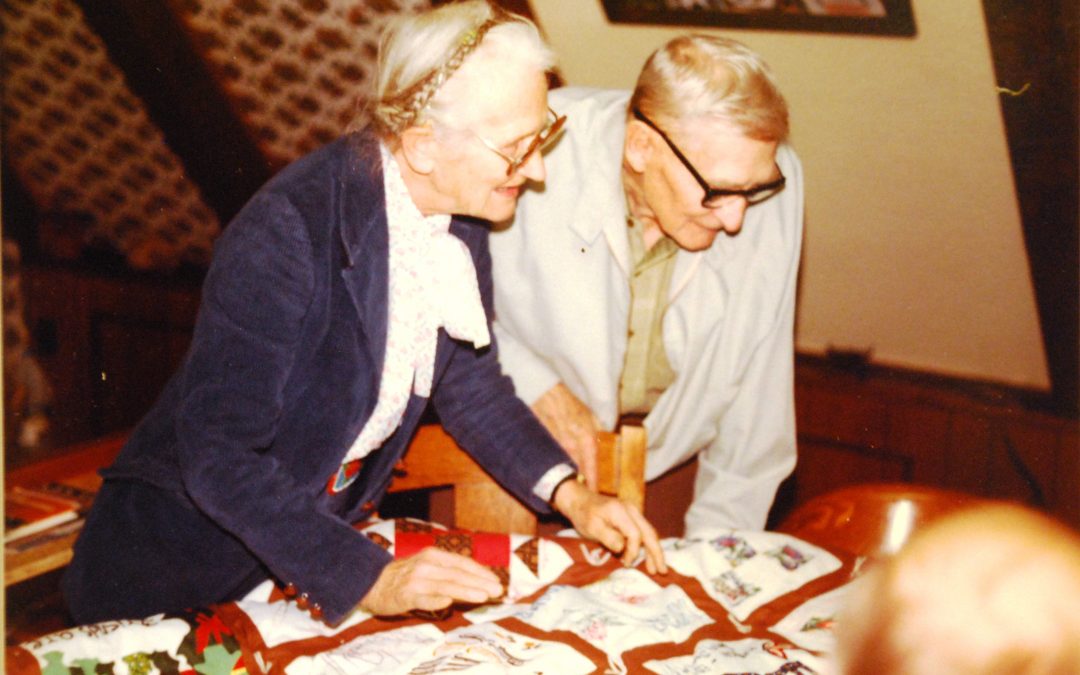 Sucked in by a Good Story

We’ve all met people who are amazingly kind and generous. You feel good around them. You want to celebrate them. Well, in the process of researching my forthcoming book on the history of visual art in the Wind River Mountains (Taking Root in Rocky Soil), I came to know Mary and Joe Back. It started something.

Sadly, I did not meet them personally. This was mostly through their archives, which are stored in an upstairs room in Headwaters Arts & Conference Center, in Dubois, Wyoming. Joe died in 1986; Mary died in 1991. I came to them through their life story, not their personalities. And let me tell you, their lives bordered on the epic.

Joe grew up in Missouri but ran away from home after 8th Grade when a mischievous drawing of his teacher earned him expulsion from school and additional wrath from his stepfather. He found work as a chore boy on a ranch outside of Douglas, Wyoming. Meanwhile, Mary was growing up in Vermont under better circumstances. She attended Berea College in Kentucky, then earned a slot at the Art Institute of Chicago. Back in Wyoming, Joe was working on a dude ranch near Togwotee Pass, and sketching in idle moments. A visitor with connections got him into the Art Institute of Chicago, and he bumped into Mary while she was sketching a grizzly bear in the Field Museum of Natural History. That was it for them. She named her pet crow after him, they got engaged, and sooner rather than later, they made their way out to Wyoming.

The Backs ran the Lava Creek Ranch before World War II pulled them to the West Coast for a bit of war-effort work in factories. Once back in Wyoming after VJ Day, they continued with the ranch until age and declining health suggested a calmer lifestyle. They sold the ranch and bought some land east of Dubois right on Highway 26, and built a roadside gallery and a house and studio a little ways off he road. That’s when Mary ramped up her efforts in art … and perhaps more importantly, art education.

Mary traveled across the better part of Wyoming teaching art on the Wind River Reservation and in other locales. Her efforts earned her awards and honors from the governor and a host of other admirers. In Dubois, the Backs were much loved, and a visit to the Back home meant long, lively conversations and an inevitable sketch or two. Mary was the Johnny Appleseed of painting and drawing in the Winds, and Joe was the real deal: A bona fide cowboy artist, with tales to tell.

How could I resist writing a book on them?

Actually, I will mostly be editing their writings and retelling their story, which is covered quite well by Mary’s niece, Ruth Mary Lamb, in her book, Mary’s Way. My book will be a companion piece, with unpublished short stories by Mary and Joe, interviews with friends and family, quotes from old letters, and other tidbits I have uncovered. It will be my second book with a focus on Wyoming, but it feels more like a second book focusing on the indomitable art spirit.

I spent 11 days in Wyoming in April gathering material for the as-yet-untitled book, and now I am truly on fire to start. While there, I didn’t get much painting done, but that was almost to be expected. It snows in April in Wyoming, and the wind is ever blowing. I’m no plein air hero.

But I am a big fan of Mary and Joe Back. And I feel like I might be able to do them justice with a book. So off I go… Ω

One of the most remarkable persons I have met is an art teacher in Dubois, Wyoming. Dubois is considered by some to be the most isolated town of reasonable size in the Lower 48. Its population is about 975 people. It is a great town. But it is small. And the weather and terrain is tough. Here’s what kind of person that attracts and forms.

The teacher’s name is Danita Sayers. She is a smart cookie. She hunts for her own meat. She knows several grizzly bears personally (and warily). She knows what plants cure what ills. This topic, call it what you like–herbal medicine, ethnobotany (much of Sayers’ knowledge comes from area tribes), naturopathy, simple common sense–is what my latest article is about.

In September 2018, at the Susan Kathleen Black Foundation’s Artists Rendezvous & Workshop, Sayers took the stage for a presentation that came in well under her 30-minute timeslot, and she covered 30 times what some people do in 4 times as much time. So add succinctness to her skills.

Now that the numbers are out of the way, I’mma give you the link to the article. But first, a few more words about Danita.

She is physically striking, with a very small frame and very long brown hair. Her mind is always turning and you can see it happening, but she is patient in answering questions and helping people. Her students absolutely dominate the statewide arts competitions, and they admire and respect her. To get to work, Danita sometimes has to use a combination of walking, ATVing, and driving, down from the grizzly criss-crossed top of one of the Wind River Mountains just west of town. Her stories will make you cry with laughter.

I heard she was planning on writing a book about her experiences with grizzlies. I presumptuously offered to help. She shared a two-page excerpt of her manuscript, and I quickly realized that she needed no help. Her prose sings.

I have no doubt Danita Sayers would be prized in any community (even as she seems to remain a mystery to more than a few Duboisites). She could take Manhattan, rock LA, intoxicate New Orleans and straighten up Philadelphia. She will do none of those things. Danita likes it just where she is. So perhaps one of the most remarkable things about Danita is that her pride is seemingly reined in to the perfect balancing point of self-assurance and utter indifference toward recognition, praise, fame. Ω 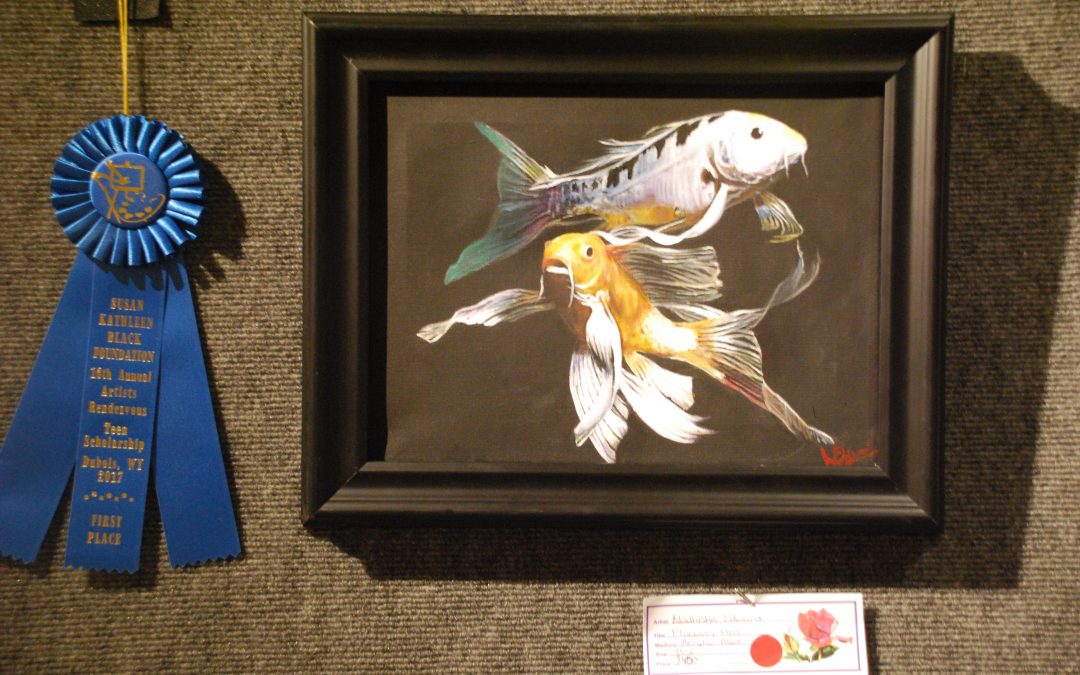 A Look at How Artists Should Choose Frames

I took notes last Fall when a few professional artists and industry leaders discussed frames for paintings. Here is a summary. 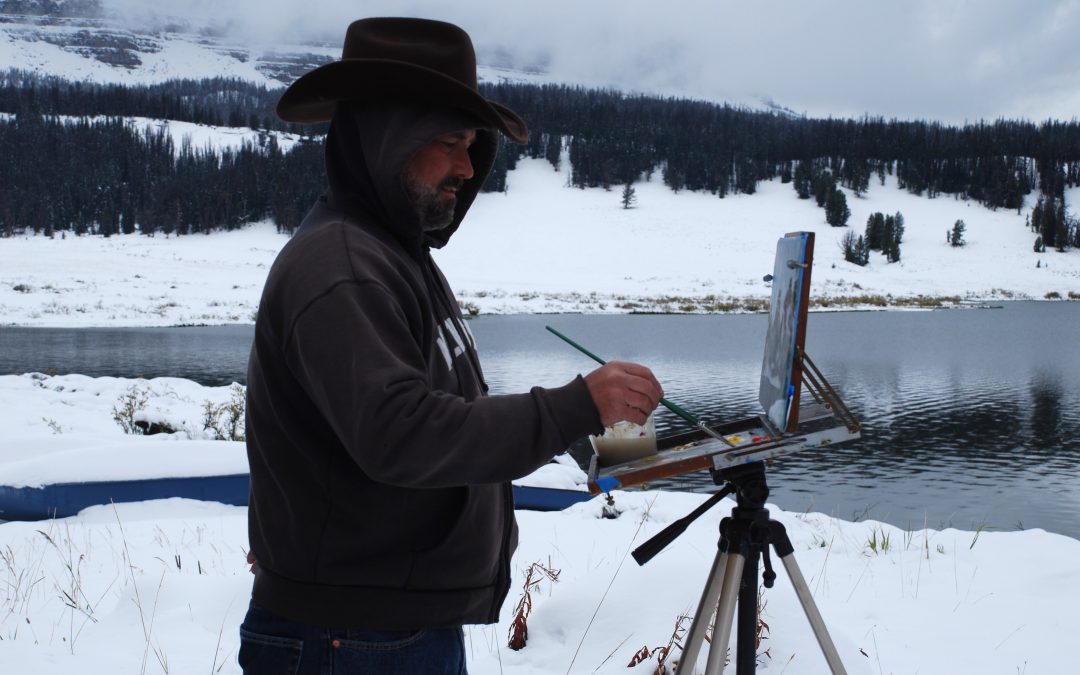 Once, long ago, the most excellent band Rodan said they would agree to an interview if they got to ask questions of me as well. I agreed, and it went OK. I still remember their question about how I wipe my butt, which seemed to be equally motivated by bathroom humor and some Freudian idea one of them had. My answer truly surprised them.

Recently, the tables were turned again, when Ann Trusty and John Hulsey sent me interview questions for their artistcentric website The Artist’s Road. It felt weird being the interviewee. But I dearly love Ann and John, and was honored that they would want to hear from me.

Check it out here. It will be behind a paywall pretty soon. Subscribe to The Artist’s Road if you like it–their articles are pretty beefy and helpful. Ω

I’m Not a Joiner, But I Joined

I grew up in a house that backed up to the 14th Tee of a private country club golf course. My family didn’t belong to the club. My parents weren’t about to spend that kind of money on a club membership, raising six kids.

A lot of my friends in the neighborhood did belong, though. I was a frequent guest of them at the country club pool. In fact, I was so frequent a guest that I was always brown as a biscuit by mid-July, and became so strong of a swimmer that the country club coach asked why I wasn’t on the swim team. The shit hit the fan when he found out that this kid he saw all the time wasn’t even a member.

At times I wished we were members of the country club, but not often. Some of my best friends were. They and their families seemed like really good people for the most part, from what I recall. But there was a fairly large contingent at the club who were boorish. The dads were overweight, the moms were underweight, and both were often drunk. It was good fun to watch certain members zoom up in a golf cart, drunkenly chop at the ball on the 14th tee, curse, and veer away down the fairway, while we ate dinner and watched out our window. And let’s not talk about the clothes. Yeesh.

In college I despised the Greek system because in my freshman year I watched my best friend be humiliated over and over by his “frat brothers” who hazed him as a “pledge.” I couldn’t understand why he accepted the abuse. If somebody slapped my head and called me those names, I would have given them a nice Hawaiian punch. I mercilessly made fun of the fraternity at my small liberal arts college, via a humor column in the student newspaper, and on more than one occasion, I went to frat parties at UofL and flipped the breakers on the fuse box, yelling into the dark, “Frats suck and you all buy your friends!”

So I guess you could say I’ve never been a joiner.

I don’t feel a need to formalize a friendship with other people, pay dues, go to meetings. I would feel pretentious putting letters after my name. I’m a registered Democrat, but I was an independent for years before aligning myself with a party.

But in September, I joined something. Not just a club, but a GUILD. Now, the word “guild” is a dirty one in my vocabulary. I hate the idea of excluding someone from a trade organization until they meet the real or imaginary standards of the establishment. Always seemed elitist, exclusionary, and bullshitty. Nevertheless, Tammy Lucas offhandedly asked if I wanted to be a member of the Wind River Valley Artists Guild, and I found myself immediately saying, “Sure!”

I imagine that I won’t be terribly active in the organization. After all, it’s located in Dubois, Wyoming, and I live in NYC. It’s not that I’m super close with a lot of the members. I’m sure I know a few because I have experience and connections in the Dubois art scene, but I have no idea who is on the roster. But I’m proud to be a member of the WRVAG nonetheless.

Is it the quilts that members sew, some with depictions of birds so wonderful, each square could be its own piece of art? Is it because their yearly painting and sculpture show is surprisingly big and of good quality even though Dubois is a town without a stoplight?

I think it is for two reasons. First, I love the Wind River Valley. I am eager to make permanent connections there. I’ve already made some good friendships with people in the town of Dubois, and elsewhere in Wyoming.

The second reason is related to the first. Life can be hard in Wyoming. Most of the people I know who live in the Dubois area have more than one job. The high school football coach has a bead store and carves art out of moose antlers. A real estate agent is also a trout fishing guide. A rancher also works at the Bighorn Sheep Interpretive Center. But the artists in the area do all that they need to do to make a living, AND they put together a show and support each other. That’s my kind of club.

I won’t be putting “WRVAG” at the end of my name on papers, letters, or paintings. It’s funny even to type that. But I’ll be paying my annual dues and stay a member in good standing.

Nobody is more surprised than me. Ω